So, about a week and a half ago was American Thanksgiving. Originally, we really weren’t planning on doing much since it’s an American holiday and we’re in Korea – in fact, I don’t think the kids even knew it was Thanksgiving in the States until we mentioned it! Ha! – oh well.

Anyway, we decided to do something because my Mother-in-law is American and she seemed really, really excited about doing an *American Thanksgiving* since she hasn’t had one in one many years…so we did! Besides, I really like the gathering-together of Thanksgiving so we didn’t mind at all.

Back when we lived in Minnesota (1997-2013), we used to have an unofficially-named “transplant” Thanksgiving. We’d invite friends who were “transplants” to Minnesota (like us) to share Thanksgiving as well as a bunch of other holidays – Thanksgiving, Christmas, New Years’, birthdays, Easter, etc.  It kind of became our little tradition and our friends became our family while we were all away from our families. 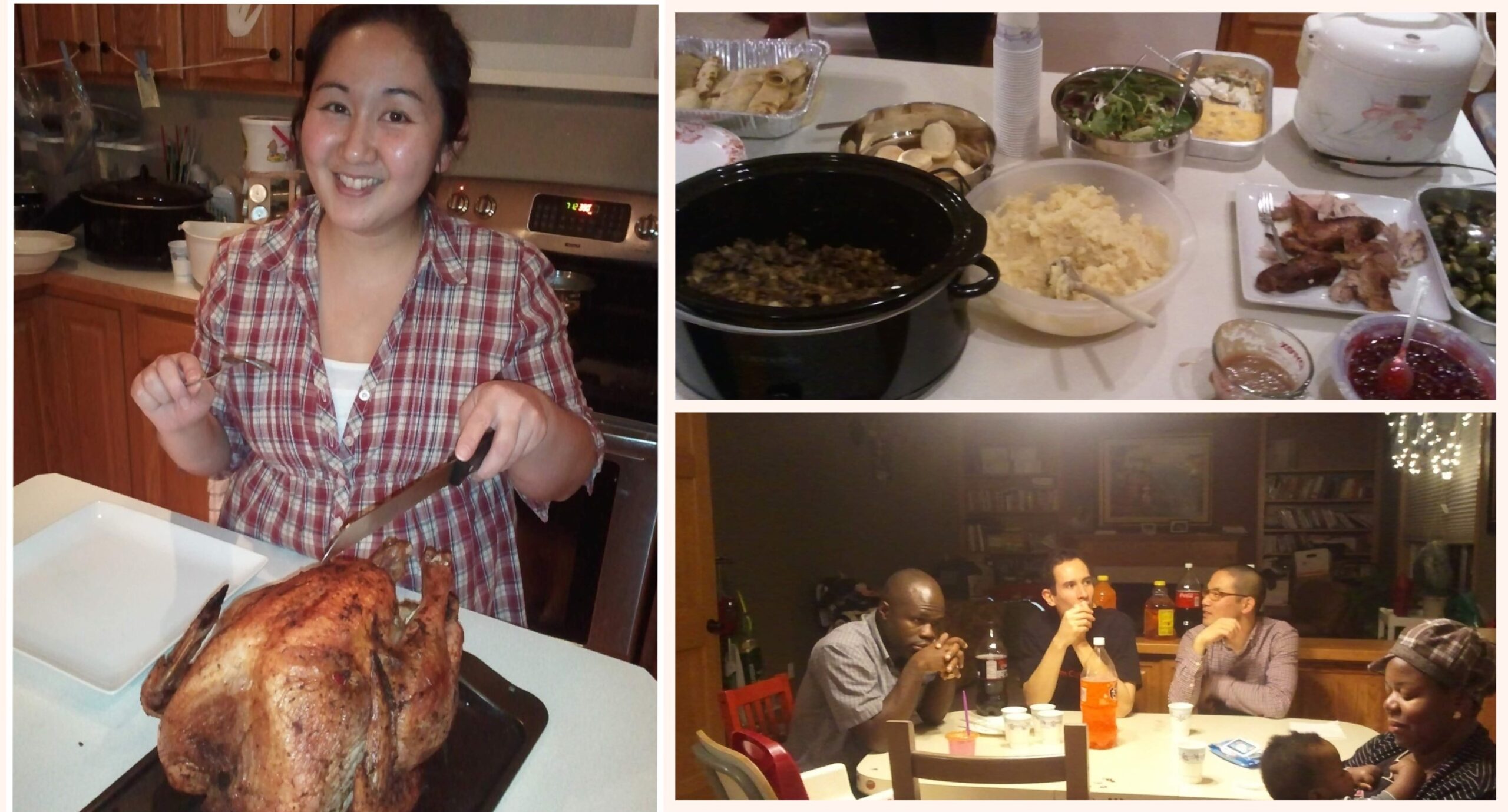 In Hawaii, we had my whole extended family to celebrate the holidays. Most Thanksgivings we met at my Grandma’s sister’s home (yeah, I told you the whole extended family, right?) along with my great aunt’s children and their families, my Grandma’s brother and his children and their families, and my other great aunt and her child and grandchild. Since my maternal grandfather was usually on his own, he often came to the party too. I really love big family holidays. Even though we saw each other a lot – church or regular family gatherings, etc. – it was still fun to hang out with my great-uncle or get updates from the high school or college-aged cousins, etc. We’re a pretty mellow family, so it was usually just time to hang-out and catch-up.

This year, between living in Korea and Covid-19, I wasn’t planning on much.  I wasn’t at all sad about it either because we just celebrated Chuseok (Korean Thanksgiving) with Lym’s family and we’ve been really pre-occupied figuring out how to help the kids learn Korean, help me study Korean, and give Lym time to catch-up with his freelance work.

The cute thing was, I think, Lym’s MOM wanted to celebrate. I guess it makes sense, it’s an American tradition she hasn’t been able to enjoy or have any reason to celebrate until this year when her American grandkids and daughter-in-law (and son!) moved to Korea. As a bonus, my brother-in-law (the second son) decided to move back to Korea after Covid-19 broke out in LA.  So after a few (like 30+) KakaoTalk family messages back and forth, Thanksgiving in Korea was game-on. ✌️

On Thursday – Thanksgiving Day – we didn’t do much. It’s not a holiday here so all of us had school, work, and classes through Friday so we decided to gather on Saturday. As a last-minute thing, I did end up doing a Zoom Thanksgiving with my family. That was fun too – they couldn’t really gather because of Covid-19 in Hawaii so Zoom was the best option, especially with my brothers in the mainland as well. The only bummer was watching them eat in Hawaii. I really LOVE Korean food, but Koreans don’t do Chinese food the same. My Hawaii family did Chinese take-out for Thanksgiving and it looked soooo good.

I also really enjoyed observing – via Facebook – how our friends and families planned a variety of Thanksgiving celebrations during this unusual year – Zoom Thanksgivings, small gatherings, traditional larger gatherings (depending on the circumstances).

For our Thanksgiving in Korea, we decided to do a birthday / Thanksgiving combo celebration (for the October & November birthdays). Besides my parents-in-law and Lym’s second brother, Lym’s sister and her husband, and Lym’s third brother, wife, and child also came. Lym has a big family – he’s one of FIVE kids – so even a “small” family gathering, can expand quickly!

Lym’s family is really different than mine, with his parents from two different countries and cultures but all the kids born and (mostly) raised in Korea. Everyone, including Lym’s dad, can speak in English, so it makes it easy for us (but not necessarily easy to learn Korean! LOL), and gatherings with them usually become a mix of English and Korean. Food-wise, it was pretty Americana, but with chicken instead of turkey since that’s hard to get in Korea.

Lym’s mom had a menu set in her mind so I just ended up helping a little bit – I did prepare my first “Korean-style” birthday fruit set-up, though!

I really like spending time with Lym’s siblings – they’re more *passionate* (loud?!🤣) than my family, but it’s fun to see Lym and his brothers and sister + in-laws getting so well. With such a big family, I wouldn’t have been surprised if someone didn’t like a particular sibling or in-law but I think that’s not the case with us. We all get along quite well so I’m happy about that. (Now I just need to learn more Korean so I can understand more of what is going on – I feel bad when they stop talking to translate for me.) Oh, just a side-note: I’m the only in-law that’s not Korean. I guess it makes sense since they all grew up in Korea, but I did ask Lym why he was the weirdo who didn’t marry Korean…of course, he still married Asian (American), I guess! Ha.

Anyway, I got a little off-track but basically, I wanted to document our first (unexpected) Thanksgiving in Korea. I was completely ok not having one, but I’m glad we did anyway.

The next step is to figure out how to do Christmas here. The kids understand there’ll be no tree but they’re still hoping and anticipating a visit from Santa. I gotta figure out how to make that one work because Koreans don’t really celebrate Christmas with the same enthusiasm and *us Americans.* Hehe. Also, we don’t have the funds or space for lots of stuff so I told them I’m not sure what we’ll be able to pull off this year but we weren’t going to go crazy with lots of presents – but seriously, did we ever??!! (Honestly, not really so I think it’ll be ok.)

I’m all for a Korean-style “Christmas” cake and maybe a nice dinner, but I think Sunghoon (our six-year-old) is really hoping more.

I’ll keep everyone posted on what we’re able to do. It’s already into the second week of December, so I think I might already be behind!