Well we got it. Covid, that is…

Well, bummer…it finally happened. Well, for three of us, at least – we tested positive for Covid. I don’t understand because Lym, Bohoon, and Jiyoon keep testing negative, no matter how many times we check! Well, Bohoon has a Teflon-immune system from licking public bathrooms and eating off restaurant floors as a little kid, so that kind of makes sense. Hehehe.

Over the past few months, we’ve been watching the Covid numbers spike up. In September, we saw the daily count jump from 1000s to 3000s and then in December from 3000s to 5000s.

My screenshots of a daily chart from Kakaotalk (a Korean app social app) showing the daily Covid count (yes, every so often I’ll screenshot the graphs). One screen is from late September 2021 and the other is from December 2021.

More Kakaotalk screenshots from January, February, and March 2022. Look at those numbers jumping up!

**Fun fact: I might have been part of that 300K+ daily count since I was just confirmed as Covid positive and quarantined a couple of days ago. [Me: “Yay,” I croak weakly, followed by a series of raspy coughing sounds.]

Honestly, after seeing the numbers jump up, Lym and I were almost expecting one of us to get it; especially with the omicron variant easily spreading, Jiyoon’s soccer games and road trips 2+ times per month, and school starting back up again. Also, the numbers were bound to jump up once the new school year began in the first week of March and as schools began providing Covid self-test kits to all the kids: two kits per week per child, with recommendations to have students self-test on Sundays and Wednesdays – *recommendation* not requirement.

Anyhoo, in our case, we actually decided to have the kids crack open their test kits the first Sunday after school started since NH was feeling a little under the weather and we were getting text notices from teachers about other children testing positive in their classrooms.

And so it begins!

Turned out, it was a good thing we checked. Namhoon (15) and Sunghoon (8) tested positive but Bohoon (13) & Jiyoon (11) were negative. I was a little surprised about Sunghoon; at the time of the self-test, he wasn’t really showing any symptoms. Since two of the kids were positive, Lym and I also took a self-test at the testing site where our boys had to do the PCR tests. We both tested negative on the self-test so we didn’t do anything else. In any case, at home, we began sectioning off parts of the house for the boys in advance of the test results.

On Monday morning, Namhoon and Sunghoon were confirmed positive and we were encouraged to get a PCR test too (as close contacts). In terms of quarantine, three kids had to miss school for a week – Sunghoon, Jiyoon, and Namhoon. The boys were in full quarantine but Sunghoon didn’t care, he felt fine and got to miss a week of school (LOL). In Namhoon’s case, he actually felt sick, so he could rest without worries about missing too much school. Jiyoon was a little grumpy – she couldn’t go to school because a sibling(s) had Covid. However, since she tested negative herself, she wasn’t in official quarantine so she could still play with friends and go to soccer practice. BH just had to go to school because he tested negative and had his 2 vaccinations.

As for Lym and me, we tried to take the PCR test on Monday but the line was insane, and ended up going back early on Tuesday. The line was still a couple of hours wait, but now I had a scratchy throat and cough so thought I’d better check. 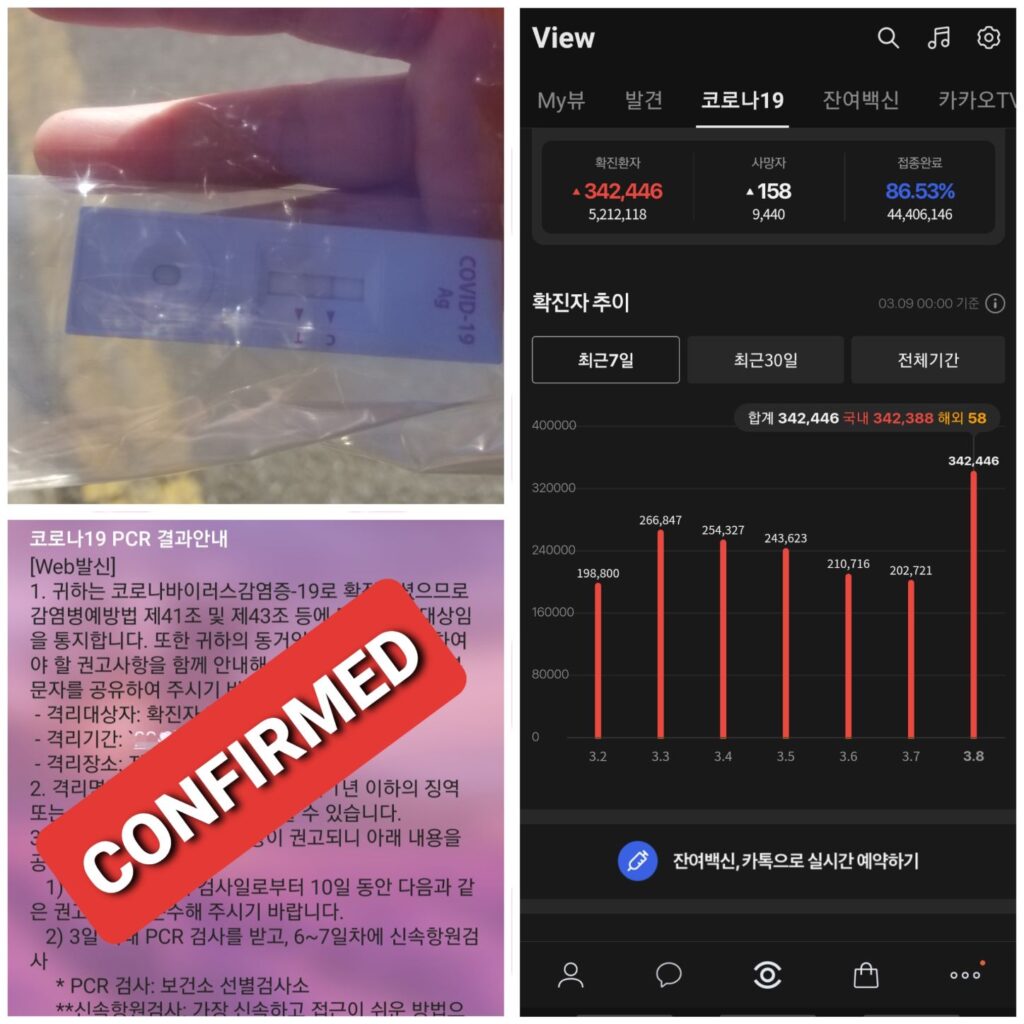 Clockwise: My first negative self-test on Sunday 3-6, a Kakaotalk screenshot showing the high daily count on 3-8, my Covid positive confirmation after testing on 3-8.

The next morning I found out I, too, was Covid positive so, now I’m part of the quarantined Kims.

Luckily, I’m not feeling too bad so far – most of my colds feel worse than this. The biggest symptom is the tickly throat/cough that’s now becoming annoying (but I’ve had those with colds in the past as well).

It did make us wonder though if the omicron variant is this mild, would we have caught it if the kids weren’t asked to test via the schools? In addition, we also questioned if the colds Lym and his brother had a few weeks back were actually colds or Covid – none of us thought to get them tested at the time because the symptoms seemed to match those of light colds and they were feeling better within about a week!

So, that’s what’s happening now in our house. We’re trying to keep 2 rooms and a bathroom as the “quarantined” zone but it’s a little difficult with everyone sharing spaces for clothes, computers, etc. Also, I didn’t really realize how many different spots on a door frame we touch or how often all of us share food – I find myself sanitizing and re-sanitizing spaces A LOT. I’m still in the amateur league where I spray sanitizer on a door handle then realize I need to touch said door handle to close the door (sigh). Now I have a whole new level of appreciation for people who are responsible for cleaning and disinfecting public spaces 💖. I just need to survive a week of this, hope the other kids don’t get Covid, and then I’m done! At least I’m making good use of all the masks, gel, and sanitizing spray we’ve been collecting for the past 2 years!